1. I’d like to assemble a manuscript and see what it’s saying. I have a feeling that
there’s a fleeting sense  of bodily wrongness before I get to the illness/recovery
poems. How weird is that. An anticipation because you don’t know what it is but
you know it’s coming.

2. Press on illness/recovery poems. Are there more? I should have a time where
I just try to riff on the places and feelings and stick figure me in the midst. If I
cannot  think. If I cannot walk.

3. Just a little while ago I had the idea of the word “Beggar.” I think it’s related to
illness/recovery. Have a  focus-day session on that. What I am to you. See what
birds land in the field.

4. Poems of joy which seem to be more easily had than poems of happiness.

6. Get the work out both small and large. Really push on this. Make up a summer
list of things to do.

7. Do I want to have some kind of public appearance after the reading in June?

8. I was quite put out when it seemed I was terribly whacked yesterday by being
outside and on my feet for 40 minutes. In honor of my stamina deficiency, I’m going
to try to do things in 20-30 minute increments  in May and June. This will include
writing (although I think I’ve successfully written for a couple of hours once at least
lately). But anyway maybe I must write every morning at work for 20 minutes.
Maybe it can only be freewriting (which may address many things but must be a
scallop of riffs, a flounce).

9. I want to have poem ideas and write poems whether they’re planned or
unplanned, thought of or unthought of. Write write write with or without punctuation.
Posted by susan grimm at 10:35 AM No comments: 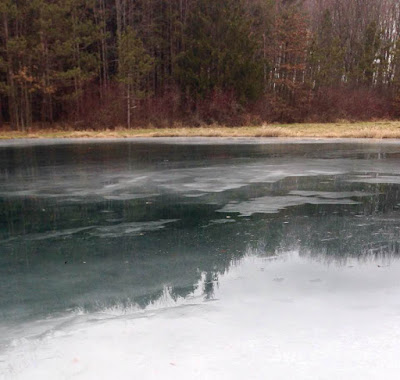 I am at the retreat and I want to write about the retreat and I want to write but I also want to take a walk while it's still 51 degrees and little pieces of ice are crunching and returning to a runny state and really I want to read all the poems I've brought with me to see who I am now which I don't precisely mean because I know who I am but my moorings are different and I'm floating on bigger waves almost tipping over but there are also all the little notes the little dribs and drabs although they are not drab--where does that come from--little pieces or things that fly through my brain and I've been paying attention and writing them down to wit
and I'm waiting for them to commune on the page to writhe like worms to find their best selves without a lot of bother from me. Sunshine. Wind chime. Pond path in January.
Posted by susan grimm at 9:54 AM No comments:

I was thinking of asking my students to journal about the process of writing one of their poems later in the semester. So I ask it of myself now with a recent poem titled (at this point) "I Never Dreamt of Trees." It began with trying to recreate in words the physical sensation of dropping off to sleep as I sat in a chair. Not my eyes heavy but my head. There was such a pull. And the sensation so vivid.

So I had the notion and I kept clinging to that notion/image while looping around it as if it were a maypole. (driving in my car, driving in my car) Little half sentences and repetitive bits remembered and written down. First writing in the back pages of my general notebook, sometimes up the side of the page.

Then the words being slid around and fastened into couplets--this time on google drive so I can access this poem start anywhere. Where do the lines end? Considering the line breaks makes me lop off a few words.

I go back to my original notes and realize I've left out "stickiness," "the stickiness of dreams," but really it's there in other words  (but sticky is such a good word). I wonder if I have gotten in this idea that the things I dream of are not from nature. I wonder if the poem which feels meditative/observational wants to go somewhere (and it should). Picking up toys I remember that I wanted to have something about Chinese handcuffs in there.

I think I am realizing that this poem is not yet done (I don't want to read it right now). Last night when I dreamt I realized there is a much better sense of surround in the dream than I was thinking. Maybe that's the part you forget first when you wake up. Background goes, then the not-really narrative.
Posted by susan grimm at 8:22 AM 1 comment:

Email ThisBlogThis!Share to TwitterShare to FacebookShare to Pinterest
Labels: process

It was my lunch hour. I had a little time, a little space, a great deal of quiet. I was trying to write a poem but nothing would come. It felt like floating in a sea of corks. No fluidity. Lots of blunted mental buffeting.

Finally, I decided to Keyser Soze the second half of the poem. I turned to my bulletin board and picked off random pieces of language to move things along. Some of the language I chose: astra, full cold moon, onion sets. Also, from stuff I'd seen on the internet that morning, the idea of winter, the idea of the northern lights.

At different times this week I was dib-dabbing at two separate poems. Here are some of the things I googled in the course of composition:
--mukluk--spelling and manufacture
--counterpane--is this word obsolete?
--clog dance--and its ties to the industrial revolution (who knew!)
--astra--word origins
--macron--exact definition
--musical saw on youtube--what do they sound like? first song was "Ave Maria"
--saucers of milk for the fairies ("green jacket, red cap/ and white owl's feather!")
--bank as in river bank or bank at the side of the road--looking for definitions and synonyms

Googling is terrific for quick (and sometimes unexpected) facts and connections, but I miss the pages of my old dictionary, my old Roget, the massive OED.


It seems to me poets are continually faced with the problem of order. Once the poems are done we keep having to cluster and recluster when we submit them. Should we send a range of work in those 3 to 5 poems? Should we send related poems, poems from a series, poems with the same voice, poems in the same format? Which poem should be placed on top?

If we're giving a reading we have to decide which poems to read and in what order. And there are further complications here. Some poems read aloud better than others. Some are surefire crowd pleasers--accessible enough, complicated enough, deep but with some self-deprecating humor.

When we're putting a book together, we have to consider the reader in a different way. We have to think about how people read. If it's a novel, mostly I'd say they begin at the beginning and continue through to the end, unless it's a bad mystery, and we skip all the middle and just read who-done-it. I know when I read The New Yorker, I almost always start in the back--those briefer pieces easing me into its intellectual waters. When reading the newspaper, people will habitually attack it in a certain way--comics first, horoscopes, sports, editorials. What about a volume of poems?

Some poets say they don't really think about the order of their poems as they're fitted into a book. They claim readers just dip into a book of poetry--gulp, gulp--so worrying about order is unnecessary. What would be important for those who approach the book as the insect does a flower--hover, land, buzz around some more, hover, land--is that the poem they land on is a good poem--something that will attract, maybe even entrance the gadabout reader, so they'll make another pass at the pages.

But I think the unconcerned poet is missing an opportunity. I doubt they'd be satisfied with a hodgepodge of work stuck together like a ball of used masking tape. Perhaps their manipulation of poems occurs in a more wordless, subconscious state--a kind of literary feng-shui. If a book of poems is looked at as a deliberate sequence, however, meant to be read in a particular order, then the effect on the reader can be cumulative.

Email ThisBlogThis!Share to TwitterShare to FacebookShare to Pinterest
Labels: order

Troublesome Poems (I've Had a Few)


Recently, I headed up a workshop about troublesome poems. It was called Vital Signs: First Aid for Poems. In gathering useful thoughts for the class, I wondered if all the categories of troublesome poems, all the queries/flaws/doubts could break down to:

The poem that is there but in disguise--uncover:
The poem that is not yet there--call forth:
Discovering/calling forth is harder. (No reference to a muse intended or welcome here.)

How I Thought/Think About Poems I Write (Connection)

A long time ago, I was trying to write a poem that was solid, all of a piece, weighty as a stone that I could drop into the vast water of a reader's attention. There would be that satisfying plop noise and then the rings travelling out all the way to the invisible beyond.

Then my desire for narrative crept in. How do I make the poem longer? How do I put the story together, where does it end? And now the rock isn't the poem, and the poem is not a container. The poem is an action bouncing off the surface of the water again and again. Or it's the points of the star that show how to draw a constellation like a crazy skeleton with faulty cartilage allowing some flex and bend.

So many of the ways I thought about poetry I have broken down. I have put aside line break rationales in order to embrace the pudding of white space holding things up, together or apart, on the page. Maybe hearing different rhythms  hurried this along? Maybe a growing love for piece-i-ness? Maybe the fatalistic nature of growing older recognizes a truth about connection: putting two things together is what makes them jump.

--The Golden Bowl by Henry James
--Collected Poems by Adrienne Rich
--i: New and Selected Poems by Toi Derricotte
--We Have Always Lived in the Castle by Shirley Jackson

My blog has recently been added to Poetry Blogs, which is part of one of the largest networks of blog directories on the Web. Please visit my blog's personal page to vote for my blog and comment to other blog users.